The Government of Saskatchewan has granted the Saskatchewan Association of Licensed Practical Nurses (SALPN) the authority and responsibility to regulate Licensed Practical Nurses (LPNs) in Saskatchewan. The purpose of professional regulation is to protect the public from risk and reduce harm to those a profession serves. LPNs are regulated because the service LPNs provide can pose a risk to the public if performed incompetently, unethically, or by unqualified individuals.

The Licensed Practical Nurses Act 2000 (LPN ACT) establishes two statutory committees: The Counselling & Investigation Committee and the Discipline Committee. They manage investigation and discipline proceedings involving LPNs. The LPN Act prescribes the composition and the authority of the committees. The decision-making functions of the committees are independent of the SALPN and are supported administratively by SALPN staff.

The processes and decision-making of the committees are guided by the below principles of natural justice and procedural fairness: 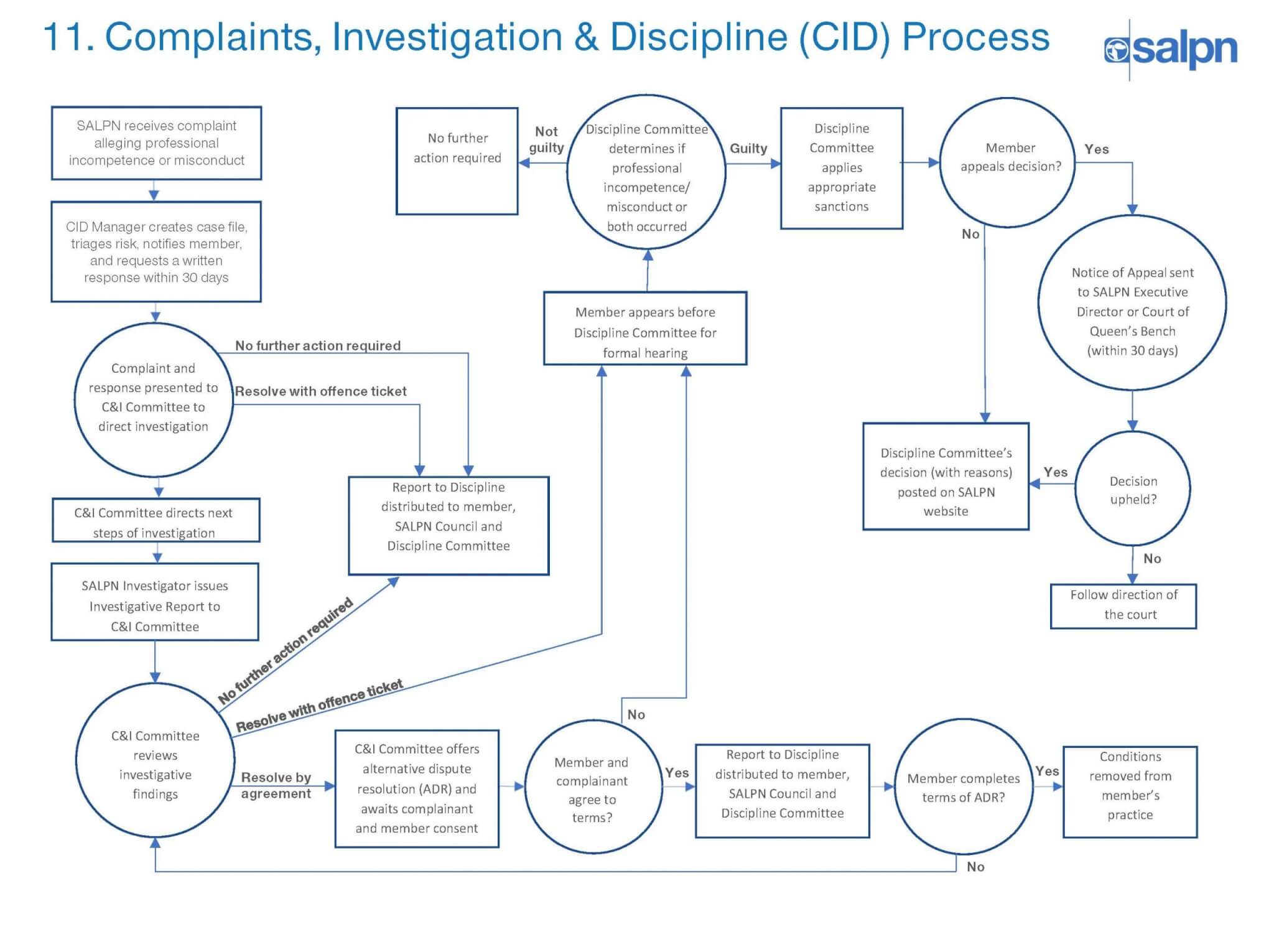 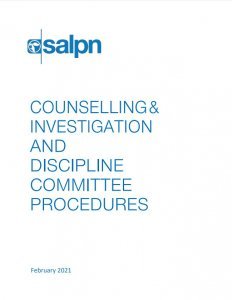 When a written complaint about a Licensed Practical Nurse is received in the SALPN Office, the Act requires the SALPN to initiate an investigation.  However the SALPN has the authority to and may investigate any situation that comes to its knowledge.

The complaint is immediately passed on to the Chairperson of the Counselling and Investigation Committee.  The Committee is required to advise the member in question that a complaint has been received and ask for comments and a reply.

If no further action is recommended, a copy of the Committee's written report shall go to the:

The Discipline Committee consists of a minimum of three persons appointed by Council, a majority of which are practicing LPNs.  Elected Members of Council are not eligible for this Committee.

At least fourteen days prior to a hearing, the Executive Director sends a copy of the complaint to the member who is the subject matter of the discipline hearing with notification of the date, time and place of the hearing.

The discipline hearing is a process similar to but less formal than any other court.  For example:

Where the Discipline Committee finds a member guilty of professional incompetence or professional misconduct, it may:

Also, the Discipline Committee may make an order that the member pay to the Association (within a fixed period) a fine and/or costs of the inquiry and hearing, in a specified amount.

Copies of Discipline Committee Orders will be issued to: The member, the Complainant and published on the SALPN website.

The Discipline process is further described in the Disciplinary Proceedings brochure. Click on the image below to view. 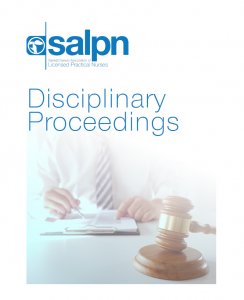 The Alternate Dispute Resolution (ADR) is a collaborative process where the accused member agrees to have committed an infraction and is willing to work with the Counselling and Investigation Committee in order to resolve the dispute in a cooperative manner. The ADR’s primary function is not to administer discipline, but rather to educate the member to avoid future incidents of misconduct or incompetence. ADR agreements are structured on the ideals of enhancing job performance, increasing practise proficiency, and assuring future quality of care. The provisions of the ADR, in which the member agrees to, will insure that these ideals are met.

Members that decline the ADR agreement will continue through the disciplinary process and will argue their claim at a formal hearing.

Professional incompetence is a question of fact, but typically encompasses a lack of knowledge, skill or judgment or a disregard for the welfare of a member of the public served by the profession to an extent that demonstrates that the member is unfit to:

Professional misconduct is a question of fact, but typically encompasses any matter, conduct or thing which:

The definitions of Professional Incompetence and Professional Misconduct are taken from The Licensed Practical Nurses Act, 2000.  In every case that is referred to the Discipline Committee, the Committee must determine whether or not the specific conduct referred to in the complaint fits within these definitions.

SALPN acknowledges the organization resides on traditional land, referred to as Treaty 4 Territory, the original lands of the Cree, Ojibwe, Salteaux, Dakota, Nakota, Lakota and on the homeland of the Métis Nation. We honour and respect the treaties that were made on all territories and are committed to our partnership with Indigenous Nations in the spirit of reconciliation and collaboration.